The Benefice Office is closed, but. for all non-urgent matters, please telephone 01189 333 704 and leave a message or send an email to admin@mortimerbenefice.co.uk and we will respond as soon as possible.

At the time of Coronavirus the Church's ministry here continues daily through prayer and online and over the telephone - whilst our church buildings must remain closed.

THE CHURCH OF ST JOHN THE BAPTIST, PADWORTH

IS OPEN FOR PRIVATE PRAYER ON

All Covid 19 safeguarding precautions must be adhered to carefully.

The Benefice is live-streaming services via Zoom.

Parish Sunday Eucharist at 10 am each Sunday

'It is not an acceptable human response, let alone a leadership response to say "I have heard about a problem, but… it was someone else's job to report it /act”’ The Archbishop of Canterbury

THE CHURCH OF ST JOHN THE BAPTIST, PADWORTH
IS
OPEN FOR PRIVATE PRAYER
ON
SUNDAYS FROM 11.00 am to 12 NOON

All COVID - 19 safeguarding precautions must be adhered to carefully.
Posted by Mortimer Benefice at 17:27 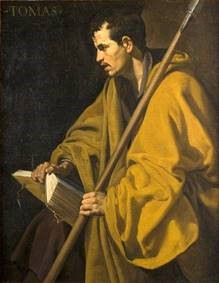 3rd July is the feast day St. Thomas the Apostle

Thomas was a dedicated but impetuous follower of Christ. For example, when Jesus said he was returning to Judea to visit his sick friend Lazarus, Thomas immediately exhorted the other Apostles that they should all accompany Jesus on the trip even though such a gesture would draw attention and heighten danger in the face of the mounting hostility of the authorities.

And at the Last Supper, when Christ told his disciples that he was going to prepare a place for them to which they also might come because they knew both the place and the way, it was Thomas who spoke up and said that they did not understand. And so Jesus gave Thomas that beautiful reassurance that Christ is the Way, the Truth, and the Life.

St. Thomas is, of course,  best known for his role in verifying the Resurrection of the Lord. At first Thomas had been unwilling to believe that the other Apostles had seen their risen Lord on that first Easter Sunday, which is why ever since he has been called ‘doubting Thomas.’ But eight days later, on Christ's second apparition, Thomas was gently rebuked for his scepticism and given with the evidence he had demanded - seeing in Christ's hands the mark of the nails. Thomas even put his fingers in the nail holes and his hand into Christ's side to make sure. After verifying the wounds of Christ St. Thomas became convinced of the reality of the Resurrection and exclaimed, ‘My Lord and My God,’ and that faith in the divine Lord would sustain him in his own long journey of sharing the Gospel to martyrdom in India. St Thomas is the patron saint of architects

Posted by Mortimer Benefice at 17:26

'A madman burns Christians like human torches'. We remember the martyrs of 64 A.D.

Inside the west doors of Westminster Abbey is the Grave of the Unknown Soldier. Many countries have a memorial to an unknown soldier, which represents  all those who died in war. On civic feast days members of the Royal Family and visiting heads of state lay wreaths and flowers knowing that in honouring that one soldier they honour all. A nation’s official remembering - in stone, statue, ceremony or speech - guards against a sort of national amnesia whereby we forget the sacrifices and lessons of the past.

The Church’s calendar is also a continual public remembering of people and theology. Today, the 30th June, we remember the Christian men, women and children who were cruelly tortured and executed in Rome in 64 A.D. by  a deranged emperor named Nero - and all for their supposed disloyalty and treachery. Vivid  contemporary descriptions of those persecutions have survived from such as the Roman historian Tacitus, who relates that some Christians were sewn into the skins of animals to be attacked and consumed by beasts and others slathered with wax, tied to posts, and then burned alive as human torches to illuminate Nero’s garden parties. Others were crucified. Nero's persecution was not some spontaneous outburst of evil, but a calculated, considered and refined attempt to get Christians and their teachings out of the way.

Today we commemorate these early Christians in the same way in which they would have commemorated Christ's death, which is by prayer and sacrifice. Here in June 2020 we are separated from 64 A.D. by many centuries, but we are united with those people by our common faith and we remember them because it is good to remember them, their prayer, their sacrifice and their witness to the grace and truth of Jesus Christ.

Let us pray. Anonymous first martyrs of 64 A.D. Rome your sufferings are still felt today in the same Church of Christ to which you belonged through baptism. Through your example and prayers help the baptised of today to be as courageous as you in witnessing to the grace and truth of Jesus Christ. Amen.

Posted by Mortimer Benefice at 10:54

Prayer Thought: Anyone Who Welcomes You Welcomes Me. Christ looks at us from the eyes of the men, women and children with whom we live, work and rest. For Christians there can be no ‘foreigners’. By welcoming each other we welcome Christ and welcome the Father who sent him.

The Third Sunday after Trinity

Evangelization is a buzz word which can sometimes sound like something we do to people who are not Christians. Whereas the best way to share the teaching and life of Jesus  - his message and who he is - with those around us is through reaching out as authentic witnesses of his love and being good stewards of our lives, our church and our world.

Perhaps we sometimes give the impression that Jesus is the one we ‘evangelize’ about instead of thinking about Jesus as being the first evangelizer; the first one to share the good news. The NT message is clear that Jesus Christ was the first and supreme evangelizer. It was Jesus Christ who proclaimed the Kingdom of God, as the urgent and definitive intervention of God in history, and defined this proclamation, this  Gospel, this Good News. Indeed, Jesus devoted his entire earthly life to this Gospel, to this Good News, for all humankind. But, as he made known the joy of belonging to the Kingdom of God, he also made known its demands, its magna carta, the mysteries which it embraces, the life of fraternal charity required of those who wish to enter it and share in its future fulfilment.

Today, we need to evangelize by the way we live our faith in the supermarket, at the beach, at a wedding, and at a friend’s party. Today there is the same urgent need to proclaim the Good News, the Gospel, and to help others experience good news in our world.  Don’t get me wrong, lots of ‘good news’ is happening all over the world, but we need to pray and seek to make known the way of Jesus and the joy of knowing him and living his way.

The NT message is that God can do great things in and through us when we truly work together and commit ourselves together to a life of prayerful relationship with God and with one another and with the whole creation. We can glimpse what this looks like though the lives and witnesses of Mary, John the Evangelizer, John the Baptiser, and many others. This Sunday let us entrust ourselves to work together to carry the Gospel ever deeper into the hearts and lives of the people and communities around us. And let us today entrust our missionary mandate to our Heavenly Father and commit ourselves anew to the sharing of his Good News and pray that we may become more faithful good stewards of all the gifts and goods that have been entrusted to us. God bless, Paul

Posted by Mortimer Benefice at 13:57

Peace can be found by trusting in God no matter what. It is the opposite of distress.
‘Be anxious for nothing, but in everything by prayer and supplication, with thanksgiving, let your requests be made known to God; and the peace of God, which surpasses all understanding, will guard your hearts and minds through Christ Jesus.’ Philippians 4:6-7
We bring our requests to God and leave them at his altar and He, in turn, gives us His peace. God bless
Posted by Administrator at 08:26

During this time of the Coronavirus many children are at home throughout the week with parents / carers. Let’s try to use this as a time to grow in faith, hope and love and in prayer and fellowship as a family. Here are 5 tips for growing in faith together as a family:


Posted by Mortimer Benefice at 20:44

Update from our link diocese of Kimberley and Kuruman, South Africa

The Stratfield Mortimer Benefice Altar Server’s Lent Mission has for many years raised money for children and young people in need in our link Diocese of Kimberley and Kuruman.

In 1993, the Diocese of Oxford and the Diocese of Kimberley and Kuruman in South Africa formed a partnership link which continues to the present day.  The funds from the Lent Mission are used as part of the support for the ‘Hope for the Living Project’ in Roodepan.  This project offers vulnerable children and young people food and support with learning and enrichment activities.

The Diocese of Oxford’s World Development Advisor, Maranda St John Nicolle, provides updates of the work and support which can be viewed at on the blog page: Kimberley and Kuruman.
Posted by Administrator at 12:47

Prayer of St. Ignatius of Loyola

Dearest Lord,
teach me to be generous;
teach me to serve You as You deserve;
to give and not to count the cost,
to fight and not to heed the wounds,
to toil and not to seek for rest,
to labour and not to ask for reward
save that of knowing I am doing Your Will.
Posted by Administrator at 10:47

Sing A New (Easter) Song to the Lord 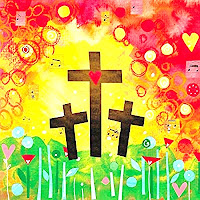 We cannot gather in our churches to worship God but we can still lift our voices in songs of prayer and praise.

Trumpets herald the arrival of Jesus in ‘May Way, Make Way for Christ the King’ at https://www.youtube.com/watch?v=tK6XuYhL7JI

‘Jesus our Teacher and our Lord’ is a Last Supper/New Commandment hymn with an easy-to-learn refrain at https://www.youtube.com/watch?v=OUx3IVS3e_4

Sing ‘When I Think about the Cross’ on Good Friday. with Brereton Primary at https://www.youtube.com/watch?v=PVYXdbJcRZM&t=38s

‘See What a Morning’ by Keith and Kristyn Getty reminds us that love wins and Christ has conquered at https://www.youtube.com/watch?v=18_PDY22Sck

‘Easter Jubilation’ is a joyful song by Helen and Mark Johnson. You can listen to a sample at https://www.outoftheark.co.uk/songs-for-every-easter.html

How to Make An Ojo de Dios Cross 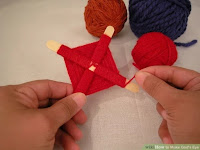 1. Place two sticks or short branches together to make the frame.
2. Secure the sticks with a glue dot or double-sided tape. Tie on the wool (the knot will be at the back of the cross).
3. Hold the cross in one hand and with the other, wrap the wool over and around one arm, then over and around the next, and so on.
4. Pull the yarn tightly each time and push the yarn down snugly toward the centre.
5. Add a new colour by knotting the two ends of the wool or use multi-coloured wool.
6. Pull/push loose ends to the back with a needle. Add a loop of ribbon or for display.