The Benefice Office can be contacted on 01189333704 from 9am to 12 noon Monday to Friday. Outside of those hours, please leave a message or send an email to admin@mortimerbenefice.co.uk and we will respond as soon as possible.

At the time of the Coronavirus the Church's ministry here continues daily through prayer and online and over the telephone.

THE CHURCH OF ST JOHN THE BAPTIST, PADWORTH

IS OPEN FOR PRIVATE PRAYER ON

IS OPEN FOR PRIVATE PRAYER

All Covid 19 safeguarding precautions must be adhered to carefully.

The Benefice is live-streaming services via Zoom.

Parish Sunday Eucharist at 10 am each Sunday

'It is not an acceptable human response, let alone a leadership response to say "I have heard about a problem, but… it was someone else's job to report it /act”’ The Archbishop of Canterbury

6th August THE CELEBRATION OF THE TRANSFIGURATION – A FULLY ALIVE HUMAN 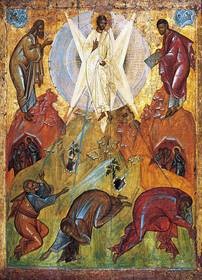 The Feast of the Transfiguration is an annual festival in the Christian calendar that celebrates the Transfiguration of Jesus Christ. According to the three synoptic Gospels (Matthew, Mark, and Luke), Jesus and his disciples Peter, James and John went to a mountain in order to pray. Whilst they were there, Jesus was suddenly illuminated by a bright light, and the figures of the great prophets Moses and Elijah appeared beside him. A voice from the clouds declared that Jesus is ‘my Son’ to whom the disciples should listen. When the vision passed, Jesus asked his disciples not to tell anyone of what they witnessed. This event is referred to as the Transfiguration, due to Christ being changed from his earthly appearance to a heavenly one. The early Church considered it to be one of the greatest miracles of Jesus and is unique in that it happened to him rather than was performed by him. The Feast of the Transfiguration has been observed in various forms since at least as early as the ninth-century and is today celebrated by the Roman Catholic, Eastern Orthodox, Oriental Orthodox, and Anglican Churches, amongst others.

Christians perceive the Transfiguration both as the revelation of Christ’s glory and as a foreshadowing of the Resurrection. Scripture often portrays high mountains as the meeting place of heaven and Earth, and Jesus’ Transfiguration on the mountain suggests that he is the bridge that brings the two together. The presence of Moses and Elijah during the moment of revelation also demonstrates that Jesus both fulfils and surpasses the teachings of the Hebrew prophets. The Transfiguration is of particular importance to the Eastern and Oriental Orthodox Churches, who believe that it was a moment when Christ revealed the glory of the Holy Trinity. It has often been said, a little simplistically,  that whereas the Western Church emphasises the suffering and Crucifixion of Jesus and atonement the Eastern Church emphasises the Transfiguration of Jesus meaning that the theology of Eastern Christianity is more concerned with spiritual glorification.

Let us pray that we may be like Christ and so full of grace and truth as to be fully alive human beings.


Posted by Mortimer Benefice at 08:11