The Benefice will be live-streaming the forthcoming services

at St. John’s, Mortimer via Zoom

The Feast of Christ the King

The Carol Service – Festival of Nine Lessons and Carols

Please join to celebrate and give thanks at the Mortimer, MWE & Padworth Parish Eucharist for Sunday 13th Sept. 2020

Please join to celebrate and give thanks at the Mortimer, MWE & Padworth 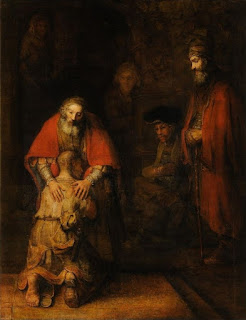 The Return of the Prodigal Son

Rembrandt’s ‘Prodigal Son’ is, perhaps, his final word, his spiritual last testament. In this masterpiece he summons all his powers to set before the world Jesus’ message of God’s mercy and forgiveness. The aged artist’s power of realism is not diminished by his years but increased by his insight and spiritual awareness. This prodigal son has wasted, ruined and alienated himself and now, sunk to the condition of a swineherd, he returns to his father’s house. His father hurries to meet and receive his long-lost son with utmost tenderness and fatherly love. As the repentant sinner leans against his father's breast and the old father bends over his son his features manifest that divine love which illuminates the darkness of self-centredness and fear and all that leaves us alienated from God, each other, ourselves and all creation. Rembrandt reveals though the father’s face and gestures that mercy and forgiveness which is of God and which reconciles and makes whole.

Prayer Thought: Jesus reveals how God forgives. We do not earn this forgiveness - it is God’s free gift to us. The only condition is that we must forgive in the same way - ‘forgive us our trespasses,as we forgive those who trespass against us’ - not with strings attached, not once only, but unconditionally, freely and always.

To forgive is to set a prisoner free and to realize the prisoner was you.

When, after years of injustice, democracy dawned in South Africa the Archbishop of Cape Town, Desmond Tutu, revived the idea of ubuntu, which, at heart, is the idea that a person is only a person - a ‘self’ - through other persons - that we only become fully human through relationship with others.

At the core of ubuntu is the idea of restorative justice; that we need justice - acknowledgement of wrongdoing - but we also need to forgive each other as we need to be restored to each other because how we relate to others defines who we are. Forgiveness is at the core of ubuntu for without it there can be no hope of a right way forward.

In this week’s Gospel reading Peter, as spokesman for all Christ’s disciples, asks whether we must forgive seven times - which means always (Ref. Genesis 4.24). Jesus answers with a parable about a debtor who, having no chance of paying off his debt, was released from his responsibility. But then he refused to be as merciful to those who were in his debt. Jesus’ message is how can we, who have received God’s forgiveness, ever crush another person by refusing to forgive them? And, as nothing can compare with God’s forgiveness of us, so there is no one we ought not ultimately be able to forgive. Jesus’ message is that when we do not forgive our neighbour we alienate ourselves from God. And he repeats this teaching several times to make the point that when we shut out mercy we show that we have not understood the love of God (Matthew 5.7, 43-48; 6.12-15). Yet, of course, what Jesus says can be very difficult for us to accept.

Corrie Ten Boom, a Dutch woman who suffered at the hands of Nazis in a WW2 concentration camp, gives a simple insight as to the ‘how?’ She writes of being unable to forget a wrong done to her and tells of how, even though she had forgiven the person, still she kept remembering the incident and could not find peace. Finally, she cried out to God for help to put the problem to rest. She tells of how God’s help came to her in the form of a kindly Lutheran pastor ‘to whom I confessed my failure after two sleepless weeks.’ The pastor pointed to the call bell in the church tower which was rung by pulling on a rope and told how, after the verger or pastor lets go of the rope the bell keeps on swinging and ringing - slower and slower until there’s a final soft dong and it stops. The same is true of forgiveness. When we forgive we take our hand off the rope. But if we’ve been tugging at our grievances for a long time we shouldn’t be surprised if the old angry thoughts keep coming for a while.

Perhaps we find it most difficult to forgive ourselves. There’s story of a priest who carried the burden of a secret sin he had committed many years before in his youth. He knew that God had forgiven him, but still he had no peace. In his parish was a woman who loved God deeply and who, it was said, had visions in which she spoke with Christ and he with her. The priest, in his scepticism, asked that when next she spoke with Christ she ask what grievous sin her priest had committed in his youth. A few days later the priest asked ‘Did Christ visit and did you ask him what sin I committed those years ago?’ She replied that he had said: 'I don't remember because what God forgives God forgets.

This Sunday’s Gospel reading gives comfort and hope to sinner and sinned against - to us all - and teaches us that ‘to forgive is to set a prisoner free and to realize the prisoner was you.

There’s a humorous story of two brothers who went to their rabbi to settle a longstanding feud. The rabbi got the two to reconcile their differences and embrace. As they were about to leave he asked each one to make a wish for the other in honour of Yom Kippur, the Jewish New Year. The first brother turned to the other and said, ‘I wish you what you wish me.’ At that, the second brother threw up his hands and said, ‘See, Rabbi, he's starting it all up again!’

Posted by Mortimer Benefice at 09:50